The Time of the Doctor 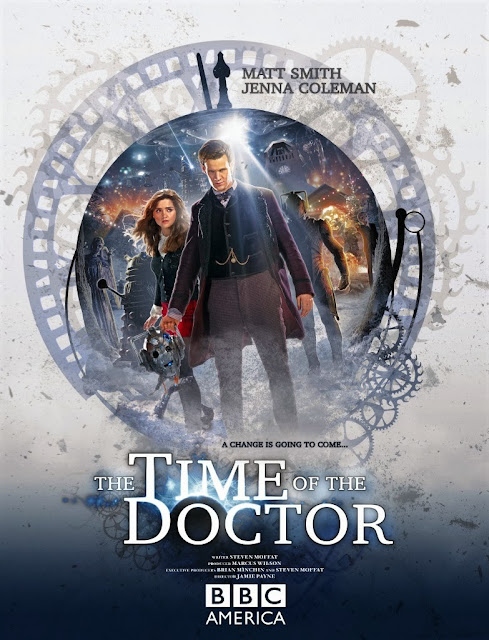 In the 2007 short Time Crash, the Tenth Doctor met with the Fifth Doctor through some wibbily-wobbly timey-wimey stuff. In the episode, after a beat near the end when Ten (played by David Tennant) has acted starstruck and gushed effusively about meeting his predecessor (Peter Davison), he said to Five, "You were my Doctor."

I understood that the line referred both to the fact that Ten had enjoyed being Five, "...dashing about and playing cricket" (Davison was less stodgy and authoritative than his precursors), as well as the fact that the Fifth Doctor was the one on the air when Tennant was a boy. He would have been about 9 or 10 years old at the time Davison began his run. What I didn't comprehend at the time was the emotion that Tennant displayed when he said that line. However when I watched Matt Smith say farewell as number Eleven in The Time of the Doctor earlier, something dawned on me. So every year, I go online and take a look at sites like RottenTomatoes, IMDB, and IMPAwards to see what's coming up next year so I know what I'm supposed to be geeking out about and when. It's every geek's conscientious duty to follow notables in their specific fandom and plan their days off to coincide with the various activities involving said subjects. Ticket line camp outs, midnight showings, crowded conventions, the occasional 72 hour gaming marathon, etc.

2014 looks like it's going to be a great year for cinema fans (especially for science fiction addicts), with some promising new titles, franchise reboots, and studio tent poles spread out through the seasons. Here are some of the ones I'm looking forward to, in order of announced release date.

S.H. Figuarts figures are a new thing for me. Japanese imports are toys that I've found I have to police myself away from. If I didn't, I'd be blowing every paycheck on this or that Revoltech, Figma, or Playarts toy that came out. They're generally more detailed, better built, and more nicely designed than their American counterparts, and aside from characters from Japanese characters, companies like Bandai, Max Factory, and Kaiyodo all take on the occasional American property.

I've been hearing that the reception for Marvel's Agents of S.H.I.E.L.D. hasn't been as great as when it was premiered at the San Diego Comic Con back in July, but since its regular run on ABC started in September, I haven't had the chance to actually see for myself. There have been ten episodes aired so far, so I thought I'd be set until the series comes back from break on January 7, 2014. Today I decided to give it a chance despite all the stuff I've been hearing. Here's what I found out:

This show is boring as shit.

In the interest of full disclosure, I need to admit that the Kenneth Branagh's 2011 Thor was my favorite Marvel movie, surpassing my like of Whedon's Avengers. I realize that for most, that movie wasn't the best, but like Ang Lee's 2003 Hulk, I found that the film's focus on the characters as opposed to the action really made me pay more attention. Thor's relationship with both Loki, his brother, and Odin, his father, made him vulnerable. It was, for me, the perfect approach to a story about a god.